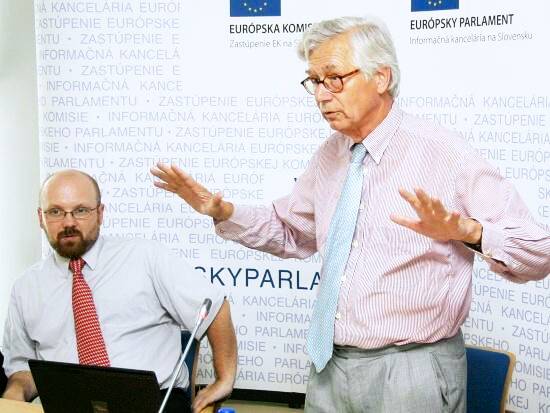 The impact of the current economic crisis for the European

6. 7. 2009 | 4646 visits
The Institute of Economic Research of the SAS in cooperation with the Representation of the European Commission in Slovakia have held another one from the series of Eurofora on June 29 in the House of the EU in Bratislava.

Discussing the impacts of the current economic crisis for the European on the industrial policy of the EU as well as Slovakia. The aim of the Eurofora is an expert discussion, an exchange of opinions and experience in the area of a variety of EU economic policy goals and impacts between its co-creators and the academic sphere.

The guest speaker of the June Euroforum was the chairman of the Consultative Commission for industrial change, the consultative body to the European Economic and Social Committee, Mr. Joost van Iersel. The introductory speech was focused on the Impact of the current economic crisis on the EU and member states´ industrial policy.

The head of the press release of the Representation of the EC in Slovakia, Ms. Ľuba Mihaleje-Hromková and Mr. Vladimír Kvetan from the Institute of Economic Research who is a member of the Consultative Commission for industrial change welcomed and introduced Mr. Iersel. He was in the years 1979-1994 member of the dutch parliament responsible for trade and industry policy and European affairs, later the chairman of the Chamber of commerce in Hague with a specialisation in regional infrastructure development in Randstad. Since 2002 he has been a member of the European Economic and Social Committee and since 2007 he has been appointed the chairman of the Consultative Commission for industrial change.

In his presentation he included the starting point, the current crisis and the challenges ahead of the industrial policy in the EU as well as in its member states. He pointed at the changes that occured since 1990, until when the industrial policy was the domain of the member states´ as it was strictly a national concept. His characteristic of the 90s was that it was the time of setting up the EU internal market and a time in which little attention was devoted to innovation. He emphasised that the constant lagging behind the USA in productivity, the rising competitiveness of China and India and the increasing unemployment rate as the result of production relocation or brain drain has led to the adoption of the Lisbon strategy. Mr. Iersel added that "the so-called emerging economies changed the pattern of supply and demand and in an increasingly interdependent world have pushed the producers to adjusting and specialising. In his opinion, many of the European industries have been in need of restructuralisation even before the crisis struck and hence the EU economy has been hit in the middle of reconstructing."

In light of the different rate of interdependency of member states´ and the international financial markets, due to the different structure of industry and a different capacity to invest in research and development, the member states face according to Mr. Iersel the impacts of the current crisis in different ways and to a different extent. However, "the crisis potentially will speed up the ongoing world industry restructuring, change the notion of regulation and frameworking of EU economies as well as the production strategies of firms on the market." By the same token, he believes that the key factors of competitive advantage, the human resources, research and development, small and medium-sized enterprises and the green economy, will strengthen their position. Personally, he supports a common energy policy, a generally more active coordination of EMU member states´ policies, an improvement of coordination of SMEs´ support and the support of the subcontractor networks in the area of research and development. At the same time, he deems necessary to avoid protectionism, redundant administrative burdens and legal barriers to competition on the internal market. In line with the official EU policy he considers the cooperation of the private, public and research sector crucial.

In the course of the discussion, Mr. Arnaud Segretain from the mayor´s Office of the Bratislava higher region pointed the attention at the role of the region in improving the competitiveness of the EU., to which Mr. Iersel replied by stressing the need to decentralise the regional policy. Mr. Matej Stuška from US Steel Košice has raised the issue of the industry being under a heavy strain from the EU climate change policy and raised doubts to what extent is the industry able to withstand it. Mr. Iersel´s answer was that: "The investor is the decisive factor in the creation process of the public policy, the targeting of goals is important, how far and in what time frame" should changes occur. In other words, for a successful implementation of policies it is necessary to reach an agreement with the social partners. "If politics are not prepared to pay the price for setting a target (e.g. climate change prevention), the companies will move elsewhere." He demonstrated his vision of the emergence of new and ground-breaking technologies in the industry on one of the basic principles of economic theory: "The introduction of a new technology always depends on the price of the alternative." 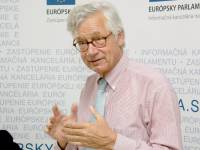 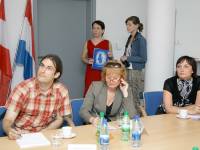 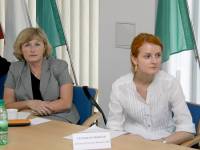